A Spot of Green in the Desert of Saudi Arabia

Saudi Arabia is mostly desert. The land, the buildings and sometimes the sky are dusty and brown. People seek respite from the heat in the malls, but for a splash of green, the choices are few. Salam Park is a lovely getaway in the midst of Riyadh, the capital of Saudi Arabia. Emerald lawns, palms trees, acacias and walking paths surround an artificial lake. Food kiosks scattered around the park are numerous and peddle boats are available for hire.

In much of the world Salam Park would be rather ordinary, just one of many parks scattered across a major city. In Riyadh, however, it is an island of calm in a city dominated by cement and concrete. Birds twitter and play in the sprinklers. Families fish in the lake. Normal stuff. But breathing fresh air into one’s lungs, being a part of nature is such a rare treat in Riyadh…

The Girl with the Forbidden Tattoo

I’m not a fan of tattoos. Until about 15 years ago, this was not too hard to manage in my kids – back when the newly blended family consisted of early teens, late teens, early twenties and a newborn, Anna.

Oh, there were the requisite pierced ears among them. Various colors of hair – white, pink, jet black, even a blue drummer one year. One of the older ones got an eye roll from me when she said that her financial plan for moving to Coeur D’Alene with her boyfriend had a back-up plan – “There’s always the tattoo kit.”

When Nick went to war shortly after high school, there was no surprise when he came home with body art. He was a United States Marine, after all, and a far reach from carefree, laidback San Diego. He carried a weapon and was shot at, so what could I do – spank him? Ground him for a week?

It was tasteful, A circle of two fish, black and white revealing a pattern of the yin yang with sleek curves and artful lines. Home from Iraq, his little brother fresh from high school took a long look and had a puzzled expression on his face?

With aloof sophistication, the marine looked down his nose at the awkward kid, still shy of his first girlfriend. He spoke evenly.

Anna sat on his lap and traced it with her short fingers on her fifth-grade hand.

Then, suddenly, tats were everywhere – on TV drinking Pepsi, on skateboards in cool clothes, on decals at birthday parties. I took Anna to get her ears pierced when she turned ten and reiterated my firm objection.

When she turned 17, Anna’s father died after a long, difficult illness of eight years. It was hard on everyone. She had been Daddy’s girl, walking on his back to loosen his sunburned muscles, going to “work” in his Yacht Outfitting office on the weekends to empty waste baskets and vacuum and standing next to him at the helm of long, white yachts during sea trials.  She begged me for a belly button pierce and I took her, just shy of 18, and signed the permission contract.

So last week Anna came to my door and just wanted to hang out. She’s 20 now, even though I still see a baby in that smooth, fair skin and want to kiss her neck a thousand times and hold her in my arms and spin like a top until the giggles bubble out of her perfect lips – she’s a grown up.

We spent a rare hour together, looking at movie trailers, talking about the family, the anniversary of her daddy’s death, her soon graduation from culinary school, her boyfriend. His motorcycle. Finally she got her nerve.

“Mom, there’s something I need to show you.”

A million possibilities flashed through my mind. Then I hit on it.

She jumped off her chair. “Yes, but they’re totally hide-able and not too…”

She lifted her leggings and there, above each ankle on the inside of her legs were tats. On one side was an anchor. On the other was an old wooden carved wheel.

“I thought you might shun me or be really mad.”

Tears sprang to my eyes and I said with a cracked voice, “They’re beautiful. It’s your body. I love you.”

Circling the wheel were the dates that are carved elsewhere on her daddy’s marble grave marker. 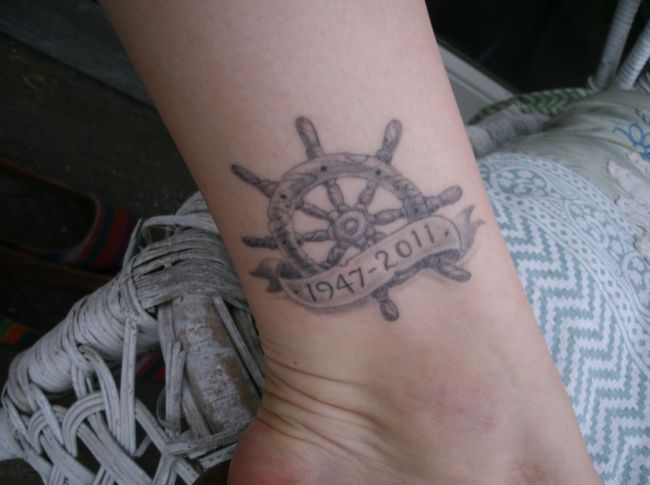 When you read the breathless, impatient, earthy story of Jesus in the earliest gospel, the book of Mark, you see Jesus toss the economy of society on its head. Back then there were religious leaders who wore fancy robes, who dissected the law into hundreds of rules, who figured they were better – far better – than the rough and tumble fishermen that Jesus chose to learn about the Kingdom of God. The economy worked pretty much like this:

The formula also worked the other way:

And 2,000 years later, most of the population of planet earth still think that’s how it works. Are you rich, powerful and think you are favored by God?  There’s a good chance you’re going straight to hell.

Jesus stunned his disciples by shattering this equation.

“It is easier for a camel to go through the eye of a needle than for a rich person to enter the Kingdom of God.

The disciples were astounded.

The disciples thought that being rich meant being in God’s good favor.  And the rich kind of thought that, too.

Again and again Jesus chipped away at this backward thinking.

“Blessed are the poor,”

“Whoever wants to be first must be the slave of all.”

“Go and sell all you have and give the money to the poor and you will have treasure in heaven.”

“The Son of Man will be betrayed to the leading priests and the teachers of religious law. They will sentence him to die and hand him over to the Romans. They will mock him, spit on him, beat him with the whips and kill him, but after three days he will rise again.”

Becoming a follower of Jesus may mean surrendering your fine robes, stepping back from your place of honor in the church, losing your home, your job, not having enough to eat and learning to accept the charity of others. It may mean you will be gossiped about and mocked. It may mean being beaten and killed.

It’s not rocket science. The more you depend on God, the more your faith has a chance to grow strong; the stronger your faith, the more God is pleased. It actually makes sense if you can get past the beaten and killed part. Which you should, since past that is the rise up part.

You, too, will rise. And it won’t be your riches or your power or your status or your poverty or your martyrdom that gets you there.It is not something that you can buy or earn. It’s not that you deserve it.  It will be because of your faith that this world has been doing it backwards and Jesus split open the curtain on eternity so we can follow him through it into a kingdom of justice and mercy and righteousness. Forever.

Hobie and Mike – sailing into the heavens

This little clip shows Mike Canrinus and Hobie and Susan Alter up near Orcas Island, doing a little whale watching on the custom catamaran, Katie Sue. Mike went up every year to service the boat. The next day Mike went into a coma on the boat and now, years later, they are together, at peace, spying angels among the clouds. http://www.youtube.com/watch?v=OhHcrsLIZzs