Holidays x One: Fourth of July 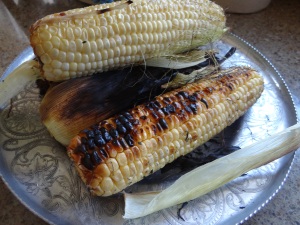 Growing up in 1950s Eagle Rock, in NE Los Angeles, July 4th was a community event. The families gathered at the local park where children roamed in packs from one family blanket to another. Cotton candy was the food staple, accompanied by sandwiches, hot dogs purchased from the local firefighters with GIANT vats of ketchup pumped by our little hands and ending up on our little shirts. At dark my two older sisters and I would huddle together on the blanket and compete to guess the color of the next firework –shooting into the air and exploding over our heads while we oohed and aahed in delight and wonder – always a little afraid that those trails of burning light might last long enough to land on us and kind of hoping they would. In those days you were left to your own thoughts about freedom, bombs bursting in air and patriotism, without any music to push you further.

The fireworks were amazing in blazing reds, silver, blue and gold, dancing over the monuments and the river. The U.S. Navy Band played and the breeze carried the sound and the colors over our heads and into our hearts.

When I was single and working in Washington, D.C. it happened to be the Bicentennial year of 1976 when a large group of us met at the hillside of Arlington Cemetery, along with hundreds of others, to watch the special fireworks display. We young women spread out red, white and blue blankets and pulled out picnic baskets overflowing with fried chicken, pies, quiches, apples and cherries, hoping to impress the young men who did handstands and cartwheels on the grass hoping to impress us. The fireworks were amazing in blazing reds, silver, blue and gold, dancing over the monuments and the river. The U.S. Navy Band played and the breeze carried the sound and the colors over our heads and into our hearts.

As a young mother, I lived in Los Angeles while my husband, Randy, pursued a career as a film editor and I wrote Sunday School stories for a curriculum publisher. And worked on a screenplay, like every other LA writer. We lived at the top of a high hill overlooking Chavez Revine and set up our balcony as Fourth of July Central. The babies were bathed and in pajamas and sat on our laps while we downed beers and burped through God Bless America. From there we could see fireworks at eye level and several others surrounding downtown. I played “What color is the next one?” with my toddlers.

A few years later I was a single Mom living on a historic street in La Mesa and we organized a 4th of July parade with all the children. I bought a cassette tape of Sousa Marches and we put in in the red wagon. Costumes were fashioned and ranged from Uncle Sam to Mary Poppins to Jerry Mahoney. Neighbors sat on their front lawns and watched the children march up one side and down the other, once, again, and yet again. The local newspaper documented the event.  On my front lawn was a table of watermelons – icy cold and sliced – so the whole street gathered and ate and a new tradition was started – spitting seeds into the bushes.

Ten years later my July 4ths became water events for the next decade. My new husband, Mike, was a boat guy. We’d gather a group of kids and friends and head out to the water, getting as close to the barges as possible. Earsplitting launches exploded into incredible colors spinning and spiraling overhead. And yes, as the fireworks burned their way into the water at times, sizzling and fizzling like a match. But I was never afraid with Mike around. That lasted, even after he became ill, until the year that our oldest child’s family and their best friends came over to watch fireworks from our back lawn. I was again on top of a hill and we could see about four different displays coming from various locations in the valley below. The grandkids were parked on blankets on our lawn, dancing colors reflected in their faces, eyes wide in wonder. It was the most beautiful July 4th of all. The next day I was awakened by a noise that sounded like the random firecrackers that get set off in neighborhoods. But it was different. Pounding. At last I sat up and realized that it was sound of Mike’s cane.

After that, I didn’t make a big deal of fireworks. I didn’t seem fair to watch them with a blind man.

This week I planned ahead. I’m a widow now and living at the little La Mesa house again.

My sister called, “Are you doing anything for the Fourth?”

“Yes,” I said. “I bought a rack of ribs that I’m going to slow cook on the barbeque, corn on the cob and then some hot dogs to use up the coals. I have some wine, some sweet potato fries, fresh green beans from the Farmer’s Market and I bought a Key Lime pie. I got a fire log for the fire ring after dark and I might put a beach chair on the roof to see if I can see any fireworks.”

“You must be expecting company.”

“No, actually, I just wanted to create a fabulous day for myself. I’m going to sit in the shade and finish the courtroom novel on my Kindle, be in my bathing suit, do a little yard work and putter around. I’ve got the outdoor shower if it gets hot and the fire ring if it gets cold. It will be perfect.”

r did drop by and we watched Chef together and hung out and ate ribs and corn and caught up a little. I gave her my tickets to the Fair and she spent time on her phone hustling up a friend to take to watch fireworks, as she should. I hope her 4th was one of the memorable ones.

3 thoughts on “Holidays x One: Fourth of July”