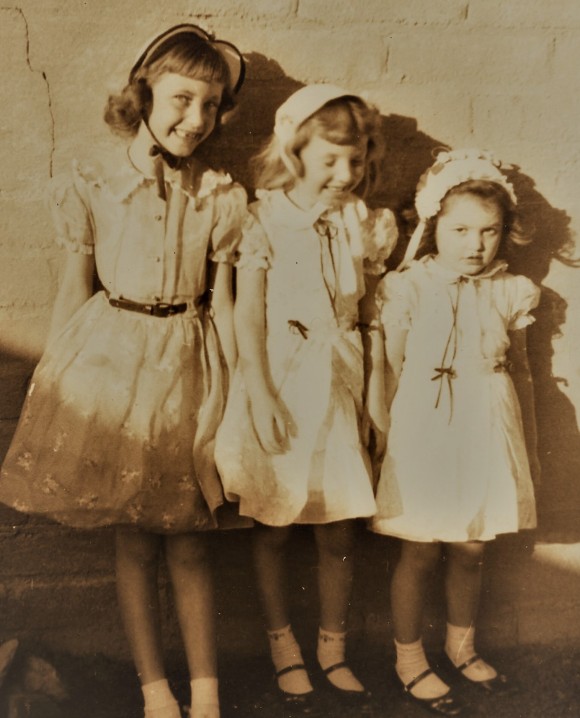 It was cold inside the church. It was always cold. The brick exterior, scraped and mortared together on countless boring weekends by my dad his siblings, I was told, had even thicker plaster interior walls. None of the large windows faced the sun. Hand-built pews were hard and slanted so that small feet couldn’t reach the floor and I was constantly fighting not to slip backwards. Squirming. Aching. Knees gripping the edge of the pew.

Hymns wafted over my head with marching regularity each week. Mrs. Abatello, daughter of Marialena, pounded the piano keys creating odd harmonies with the voices. My father’s voice the loudest.

To the cross where thou hast died …

To thy precious, bleeding side.

The words were written in 1875 by a woman, Fanny Crosby, who penned more than 8,000 hymns and another 1,000 popular songs. She was born in 1820 and became blind as a two month-old babe. Her first poem was written at the age of eight. By the age of 23 she was addressing presidents and her songs were used in mass evangelistic crusades and published in hymnals that sold over 100 million copies.

Crosby was avidly anti-slavery and later lived cordially, but separately from her husband. The Methodist Church created a commemorative “Fanny Crosby Day” in their liturgical calendar.  She was contracted to write three hymns a week for her publisher but often doubled that number.  Some you may have heard sung in churches still:

Pass Me Not, O Gentle Savior

To God Be the Glory

Jesus Keep Me Near the Cross

Fanny Crosby was paid one, sometimes, two dollars per hymn.

Of course, I had no idea then where the soaring notes and the religiously intimate words originated.  All I knew was that my back hurt, my knees were getting numb and the Song Service lasted too long. Far too long for a five year-old on a hard bench.  A cold five year-old who didn’t want to get anywhere near a dying man on a wooden cross with a bleeding side.

After the Song Service came the blessed relief of Sunday School, taught by my aunties, while Grandpa preached a sermon. In Sunday School  the messages of the songs was more concrete than spiritual. “Onward Christian Soldiers,”  “Watch Your Hands, Watch Your Hands, What They Do,” or “Only a Boy Named ‘David’:

…One little stone went into the sling and the sling went ‘round and ‘round,

And one little stone went into the sling and the sling went ‘round and ‘round,

And one little stone went into the air and the giant came tumbling down.

Hardly a passionate plea and not a drop of blood involved. The song completely skipped the giant’s head being lopped off by the young shepherd.

The marching monotony of the Sundays at The Italian Church of the Lord Jesus Christ, standing like a fortress in the middle of Los Angeles’ Little Italy – the Italian Service attended by aging immigrants long after the neighborhood transitioned into Chinatown, followed by the English Service of an offering collection, a Song Service, kneeling prayers and an honest-to-God Communion service that warned of harm if taken unworthily—continued Sunday after Sunday with unerring repetition.

One Sunday a group of men in suits like my Grandpa, with grey hair and wrinkled fingers stood inside the double-door entrance of the cold church. They huddled together speaking Italian as my father, mother, oldest sister, middle sister and I filed through the heavy doors. Swiftly, one of the men squatted down until he was eye-level with me. He reached his hand to my check and grasped it with his thumb and bent forefinger and swung my head back and forth until it brought tears to my eyes. His own eyes sparkled inches from my face.

“You are a special, beautiful child,” he said. “God thinks that you are very special and He has something important for you to do for him.  You are blessed. God will use you for his Kingdom.”

He loosened his grip and gently patted my red cheek, then stood up and returned to his conversation. I was astonished. God thinks I’m special?  I have a purpose from God?

But more importantly than being stunned, I believed him.  I always have.