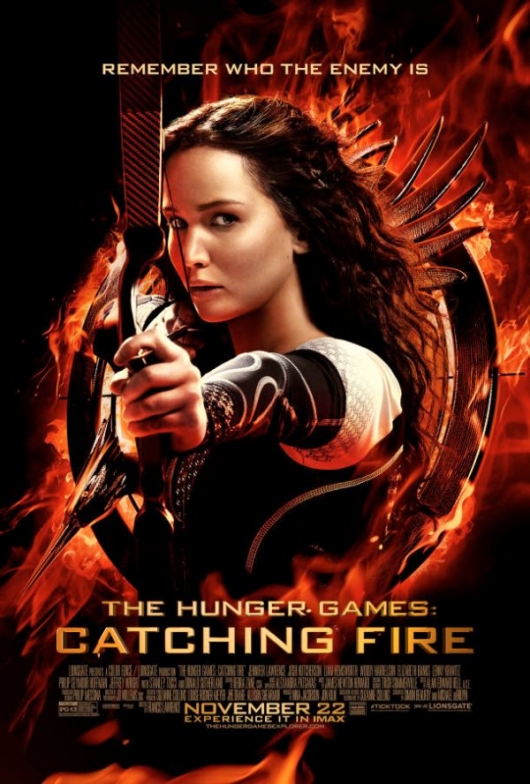 Never is it more crystal clear that Katniss Everdeen, the heroine of The Hunger Games movies, is the anti-Bella Swan, made famous in the Twilight series, than The Hunger Games: Catching Fire.

Bella is brave in her own way, of course, as a clumsy girl stumbling into one bad decision after another trying to save the man she loves – she thinks she loves. The Twilight movies spend time and money to stretch normal – to make Vampires and Werewolves really just like you and me. In fact, we all have a dark side, right? And Bella, even when she finally has strength, uses it to fight for her daughter and the right to allow good and evil to co-exist. And, aptly, even that turned out to be a bloodless fight that takes place in the mind.

Katniss takes responsibility for herself from the moment she volunteers to take on the fight against evil. There is no subtext of tolerance here. Evil in these movies wears false eyelashes, loves its indulgences and murders for play and manipulation. It’s an embodiment of the seven deadly sins – lust, gluttony, greed, sloth, wrath, envy and pride. The fight is not for balance. The fight is to the death.

One of Catching Fire’s most devastating moments comes when Katniss understands that winning was a lie, promises of life-long protection were more lies and the lies will never end.

“You are going to be on this train for the rest of your life,” explains the blowsy, boozy coach, Haymitch.

Katniss has to develop her own strength — get dirty, bloody and hungry. She has to be defiant and risk everything. Only when it’s Game Over does the idea of strategy find a foothold in Katniss’s passionate battle against wrong.

“Remember who the real enemy is,” we are reminded. And it’s not inside us. It’s real and it wants to devour us.

The movie itself is spectacular – far more than the first. Everything is intense and not just true to the book, but visually carving the book’s intentions into your psyche and you carry it with you.

When you leave the theatre, the glitter of the mall, the spectacle of Christmas and the pretense of Santa Claus might be an affront. Especially if you know that the real meaning of Christmas celebrates a defiant carpenter born in a stable, wielding a whip and headed toward death to overcome evil once and for all.